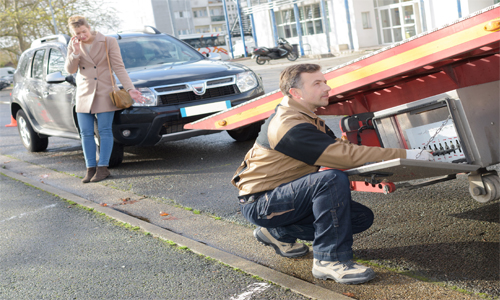 Burnaby, British Columbia — August 7, 2017 — Vehicle breakdowns are common throughout the summer months, and a new BCAA survey shows that unsafe driver behaviours and ambivalence are frequently putting the lives of roadside workers at risk. Over the past decade, more than 240 roadside workers have been struck by passing vehicles and 15 have died (2004-2013).

“I have at least one close call a week, where I’m helping someone whose car has broken down and a driver speeds by just inches from me,” says Al Lam, Tow Truck Driver and Roadside Assistance Service Tech with BCAA. “I can actually feel the gust of air from the car on my back.”

BCAA commissioned the survey to improve driver awareness of the existing Slow Down, Move Over law, and to help remind drivers how to safely drive past a roadside scene.

According to the survey, which was commissioned by BCAA and conducted by Insights West, the problem is widespread. Almost half (48%) of those surveyed have witnessed drivers speed by a roadside scene and 46 percent have seen drivers zoom by too close to the scene, with 43 percent noting abrupt lane changes. ‘Rubbernecking,’ which slows and distracts drivers, is the most common behavior at 79 percent, while 11 percent have seen drivers nearly hit roadside workers or someone involved in the scene.

So, what is the Slow Down, Move Over law? In British Columbia, the law requires drivers to slow down and move over for any vehicle stopped alongside the road that has flashing red, blue or yellow lights. Doing so gives roadside workers enough room to safely do their jobs. Workers using vehicles with either red, blue or yellow lights include tow truck operators, roadside assistance techs, road maintenance and utility crews, police, firefighters, emergency responders and more.

According to the law, motorists must slow their speed to 70 km/h when in an 80km/h or over zone and 40 km/h when in an under-80 km/h zone. If travelling on a multi-lane road, and it’s safe to do so, drivers must also move into the other lane going in the same direction to drive past any stopped vehicle with flashing lights. Failure to do so can result in a $173 fine and three demerit points.

BCAA’s survey shows that, while the majority of drivers, 84 percent, claim to be aware of the Slow Down, Move Over law, they, when put to the test, came up short on what the law entails. Over 80 percent incorrectly identified the speed reduction required by the law, 59 percent are unaware of which coloured flashing lights are indicators to follow the law and almost half, 43 percent, don’t know that they need to change lanes.

“Ultimately, it’s about driver education and empathy,” said Lam. “All we ask is if you see something on the road that might slow you down, understand that it’s probably someone like me, doing my job at roadside; someone who just wants to get home safely to his family.”

To learn more about the Slow Down, Move over law and BCAA’s survey results, visit bcaa.com/slowdownmoveover