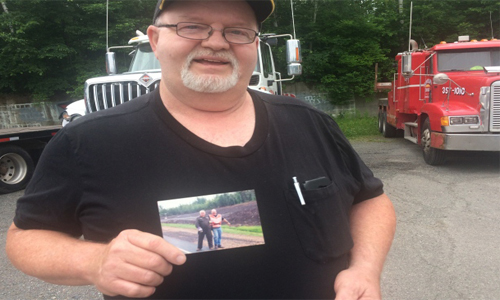 Bob Dewitt, owner of Bob’s Towing, had made a name for himself in the Fredericton towing community. A much loved friend and a coach, Dewitt spent many years of his life teaching other operators.

Last month, after a long fight with leukemia, Dewitt passed away. Brent Dunphy, Owner of Dunphy’s Towing, said he knew Dewitt his whole life, adding that the towing community will miss him. According to Dunphy, Dewitt was an outgoing and kind man.

“The people broken down on side of the road with no money and no place to go definitely understand how great it is to have somebody like Bob around. He was always willing to help out, even if it meant calling a different towing company or paying the bill and telling the person with no money to catch him next time through town,” said Dunphy. “Even after being in the towing business for his many years, when I would call Bob in the middle of the night to tow a tractor-trailer that went off the road, he would be like a kid on Christmas morning just waiting to go. I guess for some of us in the towing business it’s still just like Christmas morning when we get up in the middle of the night, racing to go help.”

Dunphy noted that Dewitt was pretty tough too, when needed. “When I told him I wanted to get my class one driver’s license, Bob said, ‘Come out to my business and you can do it here, no problem.’ And when I was doing my driving instruction, Bob was always the first to come over and tell me what I was doing wrong.”

Dunphy was one of the many individuals who Dewitt took under his wing.

Retired tow truck operator Lloyd Munn held up an picture showing him and DeWitt going to an accident when the Jemseg bridge was still being built. He said there was an accident between a transport and a car and that day both he and DeWitt were called to help move the vehicles.

John Carter, organizer of the convey and operator at AA towing, noted that towing operators will come together for the right reason, regardless of fierce competition among towing companies in the city. Dewitt’s funeral, given his commitment to the towing industry, was exactly the right reason to come together.